PART 4: Dogs Underwater
a.k.a. Why a Subwoofer is a Good Thing

Here’s a common phrase/excuse/comment/misnomer I hear a lot when recommending the addition of a subwoofer:

“Yeah, I don’t need a subwoofer, I don’t listen to rap music and I don’t need to shake the windows of my neighbors and people driving beside me.”

Why do a lot of people assume that having a subwoofer means ten 12” gigantic speakers powered by 4000 watts and you have to only listen to Rap or Hip-Hop? I have no idea, but they are probably basing their assumptions on stereotypes – not realizing that a subwoofer is an important ingredient in any good audio system.

Moving Air
A subwoofer is just a speaker that is designed to play low-frequency bass. It does this by manipulating air pressure to create low-frequency sound waves within the listening area (your truck). The physical feeling of a bass tone is unmistakable because you will more likely feel bass as opposed to just hearing it. That rumble or kick you feel is air pressure around you changing with each sound wave generated by the movement of the subwoofer’s cone. That’s why subwoofers are generally 8” in diameter or larger – more surface area means more air can be moved. That’s pretty much it! There’s no magic in how a subwoofer works – so that said, let’s focus more on the “why” as opposed to the “how.”

Low Frequency is Slow Frequency
As mentioned earlier in this guide, all speaker types have a specific purpose – and they are separated by what frequencies they are meant to play. To keep it simple, let’s divide the frequency range of music into three distinct sections: High Frequencies, Midrange, and Sub-Bass. In the image below I included a basic but very capable 3-way audio system consisting of 3 different speakers, placed where they are each designed to produce sound in the audio spectrum:

The tweeters are responsible for the high-frequency sounds, the midrange takes care of the voices and the bulk of the music in the middle and the subwoofer handles the low-frequency bass. For an easy real-world example that displays this behavior, think of your Frontier engine: at low RPM you are moving slow and the engine is making a low growl, but at high RPM you’re moving fast and the engine noise has a higher pitch, right? That’s basically how sound works – just look at it as speed differences in how the speaker moves: the faster the speaker moves the higher the frequencies it can play, and vice versa.

Why Your Door Speakers Can’t Do It
So what’s keeping your mid-range door speakers from producing the low frequencies that a subwoofer can produce? Answer: because of everything else your midrange speakers are in charge of producing. Remember how I said that frequency is the speed that a speaker moves to produce sound? To cover the wide range of frequencies in music, you need different drivers to accurately produce good sound, because a speaker is simply a physical mechanism that is moving at a certain speed.

Try this experiment: stretch your arms out in front of you, and clap your hands together loudly, like once every second. Your hands represent low frequencies (like a subwoofer), and the farther you swing your arms back, the louder you can produce sound, right? Now let’s make your fingertips represent high frequencies (like a tweeter). Hold your palms together and just tap just your left and right fingertips about 5 times a second (higher frequency). No problem, right?

Okay – now try doing both at the same time… Yep.

A single speaker driver cannot physically move in multiple frequencies at the same time. Music has multiple frequencies layered over each other. To compound the problem, if you ask a speaker to produce too wide of a range of frequencies, it will affect sound quality and reduce the performance of that specific speaker. Now let’s go back to your mid-range door speakers. Aside from the obvious fact that they are called “mid-range” for a reason, your midrange speakers are the ones that are primarily in charge of producing the bulk of the sound you hear. Mid-range speakers cover most of the audio spectrum except for (you knew this was coming) the highest frequencies and the lowest frequencies – which are what tweeters and subwoofers are for, respectively.

You already learned that component speakers separate the higher frequencies by way of a separate tweeter – the tweeter can produce all of the high frequencies so that the mid-range (which is then limited by a crossover to not receive the high frequencies) doesn’t have to. That said, the subwoofer comes into play for the same reason but on the low-end side of the audio spectrum. With the addition of a subwoofer, you can delegate most of the low frequencies to the subwoofer instead of trying to get your midrange to do it – because it can’t if it’s responsible for crisp and clear midrange.

Subwoofer in the Rear Doors = Not Really
What about running a pair of 6.5” subwoofers in the rear doors, so that you don’t have to add a subwoofer enclosure under the seat? Nice idea, but not worth the trouble. Note that I said “subwoofer enclosure” – remember, a subwoofer needs to move air to create bass waves, and it does this by being mounted in an enclosure that separates the air at the back of the subwoofer cone (which is inside the enclosure) with the air at the front of the cone (your vehicle cabin). This separation is what makes a subwoofer work. To illustrate this, take a look below:

With the above in mind, now take look at what the rear door of our Nissan Frontier trucks looks like when you remove the interior door panel:

See the problem? There’s no separation between the front and rear sound waves if you were to mount a subwoofer in the rear door. You can try to close all these door panel holes, but what about the large, wide hole at the top where the window slides in and out? You can try to build a small enclosure behind the rear speaker area… but aside from the fact that it would be a pain-in-the-you-know-what to build a box inside a door panel, once you’re done you’ll notice that now you have this tiny enclosure that just gets in the way of the window when you roll it down.

Smooth Subwoofer Integration
A simple, low powered aftermarket subwoofer system will add low frequencies to fill out the music you’re listening to. Remember, a subwoofer integrated for sound quality does not have to be so loud that it overpowers the main sounds that are being played! That means it doesn’t need to take up much room either, and luckily many compact, powered “all-in-one” subwoofer enclosures are practically plug-and-play:

Any of the small amplified subwoofer systems shown above can do the job of blending in lower bass tones that you never knew were there until you added the subwoofer!

The best integration of subwoofers are the ones that do not call attention to themselves, but they fill in the lower frequencies that your midrange speakers were never producing in the first place. And again – this has nothing to do with Hip-Hop or Rap music. I’m talking about things like bass guitars, or a trombone, or the low octave voice of a Blues or Jazz singer. Yes, you can hear some of these sounds coming out of your midrange, but they won’t have any impact until you hear it in an audio system that integrates a subwoofer.

The OEM Premium Rockford Fosgate Subwoofer (if equipped)
Speaking of integration, although most 2nd-gen Nissan Frontiers do not have more than 6 speakers from the factory, certain model trims were equipped with the optional “Premium Rockford Fosgate Audio System” upgrade. This 10-speaker system includes a subwoofer enclosure under the left-rear passenger seat:

This molded enclosure houses a pair of 6” subwoofers powered by an external amplifier, and for what it’s worth, it actually does a decent job with producing bass. If cost and space are a concern, those with the RF system have a possible bang-for-the-buck option with regards to bass: they could upgrade the rest of the audio system, but integrate the OEM Rockford Fosgate subwoofer into the plan to handle the bass frequencies.

The Cars (Trucks) That Go Boom
Last but not least, a few words for those of us who are torn between wanting to increase sound quality with a subwoofer but also want the ability to bump on the weekend cruise. Hey – if you want big subwoofers, go for it! There’s nothing wrong with wanting some bass kick because don’t forget – you can always turn the subwoofer level down when it comes to playing music specifically for sound quality. 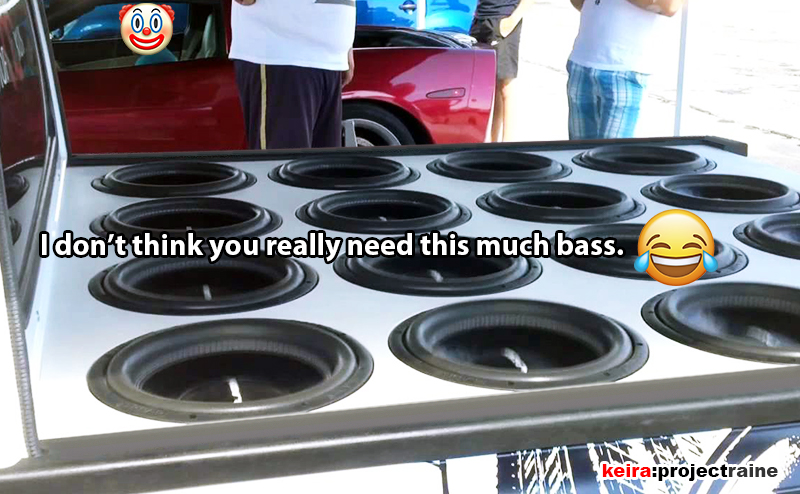 For example, I have two 10” JL Audio subwoofers in my Frontier powered by over 500-Watts. Most of the time when I listen to Metal or EDM I have my bass level adjustment knob in the 40-60% range. If I want to get the attention of the people next to me at the stoplight, I play some Rap and turn the bass knob up to around 80%. But if I’m doing a sound quality demo, my bass knob gets turned all the way down to… oh, about 10%. When it comes to playing my system with sound quality in mind, I only use a small fraction of available system power for my subs, which coincidentally is related to the next part of this guide.

In Part 5 of this series, I’ll explain why using a separate, higher power amplifier is much better than the one that is built into your head unit. HINT: Stronger muscles do less work.

Audio Upgrade Guide, Part 1: It All Starts with the Source